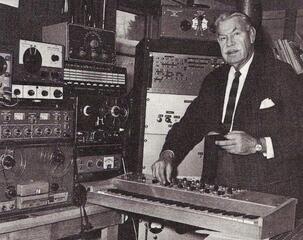 John Donald Robb was in his 70s when he discovered an entirely new medium for his musical compositions. In the summer of 1965 he attended a seminar hosted by Bob Moog in upstate New York to learn more about a revolutionary new instrument, which came to be known as the Moog Synthesizer. Shortly thereafter he became one of the first to purchase the synthesizer, and set about to create a new body of electronic music.

​Robb had begun experimenting with electronic music in the 1950s, but it wasn’t until he set up an electronic music studio inside his Albuquerque home, anchored by a Moog Synthesizer, that his passion for the new medium took off. He was attracted to the ability of a synthesizer to produce new sounds never before imagined.

In all, he composed more than 65 electronic compositions. At a 1969 concert, he collaborated with the Albuquerque Symphony Orchestra to present “Transmutation for Orchestra and Electronic Instrument”, one of his compositions that involved both the Moog Synthesizer and an orchestra. A selection of his electronic works was presented at a 1969 international music festival in Trieste, Italy. As a pioneer in this new medium, he spoke at conferences around the world.

In early 2013, Robb’s Moog Synthesizer emerged from storage and was brought back to life. Tom McVeety, the Robb Trust graduate assistant, presented a demonstration during the 2013 UNM John Donald Robb Composers’ Symposium. The restored synthesizer was featured in a fall concert that year. Plans continue to unfold for how to re-introduce Robb’s synthesizer as an educational tool at a time when there is a resurgence of interest in such analog-based electronic instruments.

“When I found his music on the CD From Razorblades to Moog, I was quite pleasantly surprised at the quality of his work. Not only does it show command of the synthesizer, but he shows compositional skill many technical operators never achieve.”
—Brian Kehew, Archives historian, Bob Moog Foundation; musician and music producer

John Donald Robb's Moog Synthesizer was featured in Musica Post-Apocalyptica, a 6 October 2013 concert at the UNM Department of Music. Read about the event.

Cosmic Dance of Shiva is one of Robb's electronic compositions. It was originally released in 1976 and reissued in 2004 by Smithsonian Folkways Recordings. Here is a dance performance from the 2013 John Donald Robb Composer's Symposium featuring Cosmic Dance of Shiva with choreography by lisa nevada, a Robb Trust board member based in NYC. Dancers are Camille Duran, Emily Innis, Kaitlin Innis, Dalton Valerio. Lighting by Sydnie Ponic and Harrison Sim.
More of Robb's electronic compositions can be found on the Smithsonian Folkways CD Electronic Music from Razor Blades to Moog.
Listen to the CD