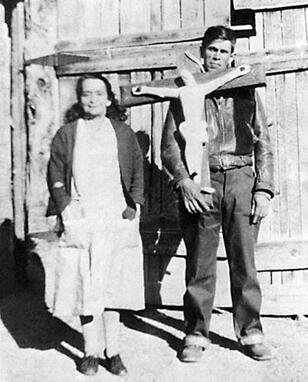 John Donald Robb’s fascination with Hispanic folk music led to his recording of more than 3,000 traditional Hispanic folksongs and dances from the American Southwest and South America, all of which formed the nucleus of the John Donald Robb Archives of Southwestern Music at the University of New Mexico. Robb was the author of several books on the subject and he received numerous honors and grants, including an honorary Doctor of Music from the University of New Mexico.

CSWR is the home of John Donald Robb’s personal papers, photographs, musical scores, field recordings, and other materials donated to the University Libraries according to the wishes of  Robb and his wife, Harriet. Visit the CSWR website for information about the collections, hours, visitor information, policies and forms. Centrally located in the UNM Zimmerman Library, the CSWR welcomes researchers from around the world who make use of our collections throughout the year.

This collection contains CD copies of Robb Field Recordings along with a number of his other recordings and publications. The field recordings and a number of the publications are also available at the Center for Southwest Research. Search the library’s online catalog for details of holdings. The Fine Arts & Design Library is located within George Pearl Hall across from the UNM Bookstore.

Robb began making field recordings shortly after his arrival at UNM in 1941 and continued that work for more than 40 years. His collection eventually grew to 94 reels of audio tapes, containing nearly 3,000 recordings of more than 1,800 songs recorded in the U.S. Southwest, Mexico and Spain. These recordings preserve many of the musical traditions of these areas, especially New Mexico and Southern Colorado, and include Native American, Hispano, Mexican and African American music, as well as railroad and cowboy songs, fiddle music and the music of festivals and fiestas.

Field Recordings are available in the following formats:

Purchase Robb's Books
There are a number of publications and recordings by Robb in the University Libraries catalog. Search by Author = Robb, J. D.