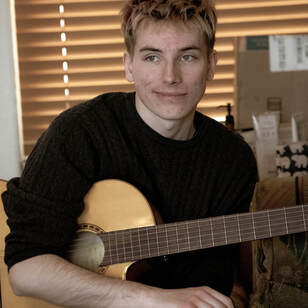 Christopher Orphal is a Master's candidate in music theory and composition at the University of New Mexico. The music he composes has been described by listeners as “music,” “sounds produced and organized in a structured way,” and “the bare minimum.” Christopher’s oeuvre is characterized stylistically through a seeming incapability of composing anything which doesn’t feature some sort of stringed instrument. His compositional interests usually center on the dimension of harmony, which has led him recently into the harmonically expanded area of microtonal systems. Previously, Christopher’s works have been premiered in several well-respected venues, including his old High School and his mother’s living room.

Here is Dan Lippel performing Christopher's work "Siaynoq" for solo guitar, in 36 equal divisions of the octave. The composition received its premiere in 2021.
Listen to more of Christopher's Music
About