She has worked extensively on the pantomimed Matachines music and dance and other folk music genres that reflect both Spanish and Indigenous origins. She conducted fieldwork in Mexico as a Fulbright García-Robles Scholar in 2000-01 and in Colombia as Fulbright Colombia Scholar from January to July 2011. As Fulbright Scholar, she taught the first musicology course at the Pontificia Universidad Javeriana in Bogotá.  She performed as Matachines violinist for the Pueblo of Jemez between 1989–98, having learned the repertoire from a John Donald Robb archival recording. She received the 2005 Society for American Music’s “Sight and Sound” subvention toward the production of her 2008 CD, Canciones de mis patrias: Songs of My Homelands, Early New Mexican Folk Songs. 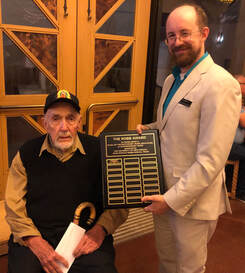 Frank McCulloch and Peter Gilbert
About

The UNM John Donald Robb Musical Trust established the Robb Award in 2018. It is presented annually to musicians, individuals, or organizations from New Mexico that have made outstanding contributions in New Mexico in the areas of Music of the Southwest, Music Education, and Contemporary Music.

The Robb Award is conferred at either the John Donald Robb Composers' Symposium in the spring or ¡Música del Corazón! in late fall, depending on the honoree's area of expertise. The award consists of: